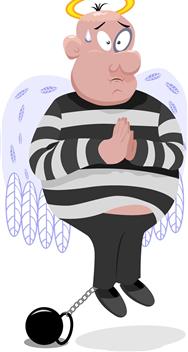 WHAT IS BAIL AND HOW DOES IT WORK?

WHAT HAPPENS WHEN YOU ARE ARRESTED?

When someone is arrested, they are brought to a local booking facility, wherein they are fingerprinted and a photograph is taken. The defendant is subsequently seen by a Judge who reviews the charges filed by the arresting agency. Once the Judge reviews these charges, he will then set a bail. There are many types of bail that can be set including R.O.R., unsecured, 10% and straight bail. If the defendant must post money in order to be bailed out of jail, you may need the services of a bail bondsman. Many factors determine how a Judge will set the bail including, but not limited to the risk of flight associated with the defendant, the severity of the crime, the nature of the crime allegedly committed, the defendant's prior record, and the danger the defendant might pose to the public. If bail cannot be posted, the defendant will be required to sit in jail until the case matter is resolved with the court.
WHAT IS A CO-SIGNOR?
A co-signor, also known as an indemnitor, is someone that signs the necessary bail bond documentation to have a defendant released from jail. A co-signor is just as financially responsible for the bail bond as the bail agency and defendant should the defendant fail to appear in court and the bail bond is forfeited. It is also the responsibility of the co-signor to make sure the defendant appears at all of their court dates, just as much as it is the bail agency. Should a co-signor believe that the defendant may fail to appear in court, they must contact the bail agency and inform them at once, so that the bail agency can take further steps to ensure that the defendant attends their hearing, or in some circumstances, revoke the bail, and re-incarcerate the defendant.
HOW MUCH DOES BAIL COST?
Bail agents charge a non-refundable premium rate for all bail posted on behalf of the defendant. Typically in Pennsylvania, the premium rate charged is 7% of the total amount of the bail set by the Judge. For example, if a Judge were to set bail at $10,000.00, one must either pay $10,000.00 to be released from jail or hire a bail agent to post the bail on their behalf. The non-refundable fee premium rate fee to do so would be $700.00. Once the necessary paperwork is completed by the co-signor and defendant, and the fee is paid, the bail agent will then post the bail bond with the court guaranteeing to the court that the defendant will appear for all subsequent court dates. Once a bail agent posts the bail, they are also agreeing to be liable for the total amount of the bail bond to the court. This means that, should the defendant fail to appear in court for any reason, or "jump bail", the bail agent will be responsible to pay the full amount of the bail to the court. However, a bail agent is also known as a third party surety. This means that any co-signor that signed the bail documents, as well as the defendant, are responsible to pay those monies back to the bail agent should the bail be forfeited by the court.

WHAT DOES A BAIL BONDSMAN DO?

A bail bondsman, also known as a bail agent, makes a living lending defendants and their co-signors money to post bail on the defendant's behalf. Posting bail allows for the defendant to go about their day to day operations while their case matter is handled by the court. A bail agent will require that the defendant is supervised by the bail agency while out on bond. The defendant must have his/her photograph taken, will have to fill out paperwork regarding their personal information, family information and prior criminal record, if any, as well as check-in with the bail agency to make sure they are taking care of their court responsibilities while out on bail.

WHAT IS COLLATERAL?
In some circumstances, collateral is required in order for the bail agency to post bond on behalf of the defendant. Collateral is typically requested when an agency is posting a high bail, when a defendant has a lengthy history or may be considered a flight risk. COLLATERAL IS NOT USED IN SUBSTITUTION OF THE NON-REFUNDABLE PREMIUM FEE CHARGED BY THE AGENCY.  Collateral is requested in order to secure the full amount of the bail if it is forfeited by the court. Collateral is returned to the co-signor or the defendant once all court hearings have been completed and the bail bond is discharged with the court. Collateral can be accepted in many forms including, but not limited to additional cash payments, credit card payments, vehicle titles, assets on paper, and mortgage deeds. Be sure to speak with your bail agent prior to posting bail in order to find out whether or not collateral will be requested prior to filling out any documentation with the bail agency.

HOW LONG UNTIL THE DEFENDANT GETS OUT OF JAIL?

Although this bail agency is available 24 hours a day, every county has their own individual procedures set forth by the court. Please contact your bail agent for further information.

WHAT IS THE NON-REFUNDABLE

PREMIUM FEE I WILL BE CHARGED TO POST THIS BAIL?